I wish I'd thought to take a picture of all the dust! You can probably get rid of most of it without disassembling the computer by using canned compressed air, inserting the plastic straw between the outer plastic and the inner metal chassis. Do it in the garage or somewhere because it'll blow out a lot of dust!

I recall reading somewhere that the speed of the main fan on the MDD models is thermostatically controlled, so eliminating the dust makes the fans run slower and thus quieter.

I cleaned it out darefully with a small nozzle attachment on my plastic handled vacume cleaner, then blew the rest out with compressed air. I too saw a 5 - 10 degrees change. Seriously, though. Apple offered a free fan replacement program, which I used.

It's still quite loud. I did get to a point where it was absolutely ridiculous - until I discovered an air inlet at the base of the front panel. Cleaning the dust plug out of there made a huge difference.

Now I keep the machine off the floor, and it doesn't gather so much dust. Great tip, though. I might just look for one of those fans. Yes this machine was part of that power supply replacement, but still too noisy. 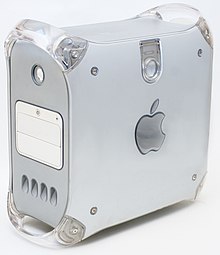 I was amazed at the amount of dust near those vent holes too Has anyone come up with a masterful fan replacement for the annoying cooling system in the rev. A iMac G5? The rev. B fixed it, but I believe they went with an entirely new power supply and internal configuration that makes it incompatible with the rev. I'm afraid I cant help you there mate. The iMac is a pretty quiet machine anyway, my mate has a 1. Thanks - you might just have given my MDD G4 a new lease of life as a home server when I upgrade it in probably a couple of months I've long suspected the main fan, but just never got around to researching it.

Now I'll not have any excuse!

About a year or so after the machine was released, so many owners were griping about the noise that Apple set up a parts swap program. You could install the kit yourself or take it to an Apple servicing dealer and they'd put it in for free. I installed it myself in my MDD and it was immediately quieter. I doubt those kits are available any more, but it wouldn't hurt to check with Apple.

I hate to think how loud it was beforehand. I was seriously thinking of selling it, but now it's whisper quiet so I think I'll keep it for a couple more years. Nap mode has been know to be problematic on MDD towers - never worked on mine. The fans in the powersupply are the worst offenders. They were rated around 55dBa to 45CFM, with stepping.

It was actually difficult to find a worse ratio. Is the SilenX fan controlled by the thermostat like the original? I bought a replacement fan a while back which was supposed to be quieter than the original, but it ran at full speed all the time and ended up being noisier. Pricey, but in my opinion well worth it. Yes the silenx fan seems to cycle up and down, just like the original, and like another generic fan I tried which didnt put out enough air to keep it cool enough. It's basicly silent mostly, then you can hear it spin up a bit more still quiet when doing any intensive tasks.

Hansen had hired Mackert to create several outdoor-sculpture pieces for his home, and when visiting the studio one day, he happened to see an Appletini Bar on display there. It is a nice fit with our focus as a company that helps the Apple platform. JAMF is best known for the Casper Suite, a set technology-management tools for large companies and other organizations that are deploying Macs and iOS devices en masse.

If that is still the case, Hansen jokes, no one will know—the founders have Appletini Bars to hide the evidence now. Pearson now displays his Appletini Bar on a table in a conference room, with its door open and a classic Macintosh Portable placed alongside it. Very green approach to reusing outmoded technology.